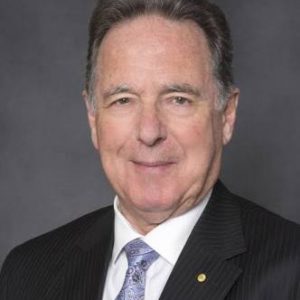 Graeme Samuel AC is a Professorial Fellow in Monash University’s Business School and School of Public Health and Preventative Medicine. He is also a councillor of the Australian National University and chairman of its Finance Committee, president of Dementia Australia, Chair of Dementia Australia Research Foundation, chair of the South Eastern Melbourne Primary Health Network, chair of Lorica Health Pty Ltd a CMCRC company, director of the Digital Health CRC, chair of Airlines for Australia and New Zealand (A4ANZ), chair of the National Health and Medical Research Council National Institute for Dementia Research.

He was a member of the APRA Panel to conduct a Prudential Inquiry into the culture, governance and accountability of Commonwealth Bank of Australia and is currently chair of the panel conducting a Capability Review of APRA.

He recently conducted a review for the Commonwealth Government of the Food and Grocery Code of Conduct.