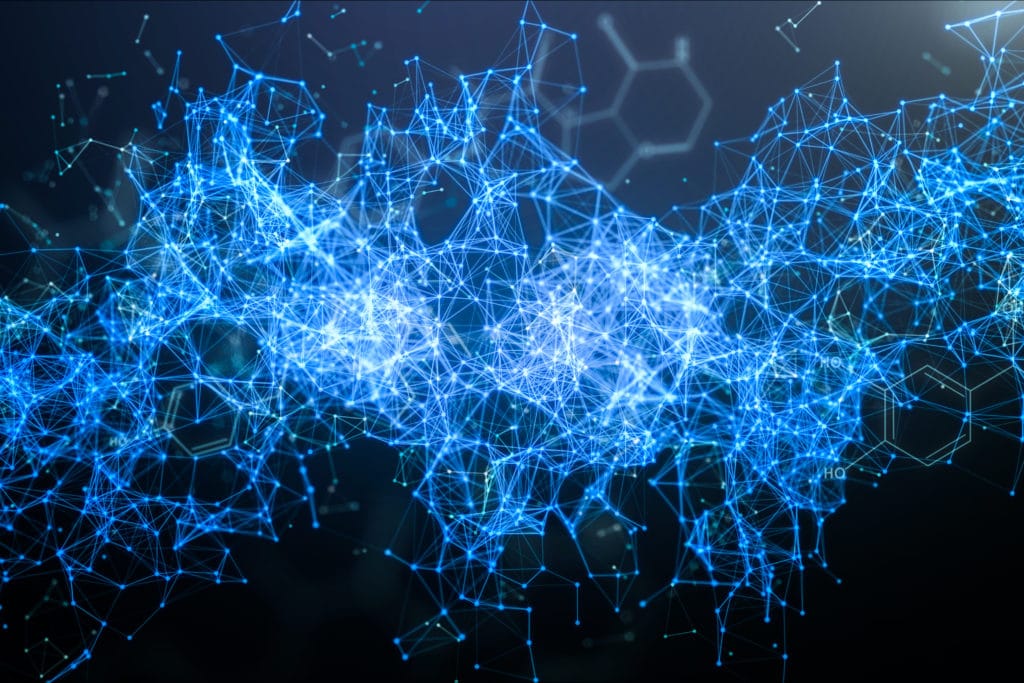 They report on the global internet bandwidth stress being caused by COVID 19.

On 11 March the WHO officially declared the novel coronavirus (COVID-19) as a global pandemic. Since then, most of us have received advice from our governments, employers, educational institutions, or via social media that basically suggests one thing: “Stay at home and avoid contact with other people.”

In its most extreme form, this has led to complete or partial lockdowns of countries, such as Italy and China, while other nations have implemented policies that led to shut-downs of wider parts of the economy or travel bans.

The result is that an unprecedented number of people are now forced to spend a high amount of their time at home leading to drastic changes in the way we work, consume, and communicate.

From Google to the US Federal government, home is the new work.

The silver lining of this situation is that the widespread diffusion of the Internet has made our work, studies, social interactions and consumption behaviour less dependent on physical locations and direct human interactions.

In a crisis situation like this one, the Internet provides our society with previously unknown flexibility on how to react to a pandemic and potentially decrease its spread by being less reliant on directly interacting with one another.

However, to make this shift from a more location- and face-to-face based physical economy, to a more decentralised, home-based, and digital economy work, we need one thing: a functioning Internet.

Unsurprisingly then, the unprecedented transformation of our behaviour has put a large strain on national Internet infrastructure, but also on the global Internet backbone.

The way our society interacts with the Internet has changed dramatically over the past 10 years. Our appetite for bandwidth is on steroids.

Work from home or telework is no longer limited by the ability to send emails but requires video conferencing capacities, a reliable VPN connection and the ability to share large data-sets within a short period of time. Most of today’s leisure activities, streaming services, video chats, online gaming, are also very bandwidth-intensive.

All this puts a huge strain on the existing infrastructure, and the increasing requirements for social distancing and self-quarantine will just further increase the congestion on the world’s information highways.

Which all leads to one big question being asked by digital observers: will a country’s Internet infrastructure keep up with the sudden surge in bandwidth demand?

Because ultimately, the Internet is probably the most important, but also most vulnerable, form of critical infrastructure we have during the COVID-19 pandemic.

At KASPR Datahaus, our distributed technology scans, aggregates, analyses and visualizes real-time information on Internet activity and quality by measuring hundreds of millions of connected fixed Internet devices all over the world.

Our technology has already been applied to create insights for decision-makers during various critical events such as natural disasters and political crises.

Every one of these events has either a direct or indirect impact on internet activity and quality. This creates signals that are detected by our geo-located global technology in near real-time, days or weeks before the market knows about them.

During the COVID-19 outbreak, we’ve already applied our technology to reveal the vast economic impact that the government’s lockdowns and bans have had on key export regions, through the lens of Internet connectivity patterns.

Here, we show how measurements on the differences in the speed of internet packets travelling between the US and destinations regions reveal the pressure of the new telework reality.

Specifically, we focus on regions within countries having at least 100 confirmed COVID-19 as of Friday 13 March, since these are the most likely to have undertaken significant social distancing activities.

By comparing the percentage change between the baseline and the recent or ‘lockdown’ speed measurement, we can get a measure of the “Internet pressure” being applied by the lock-down period as everyone stays at home, online.

In Figure 1 we show our results: 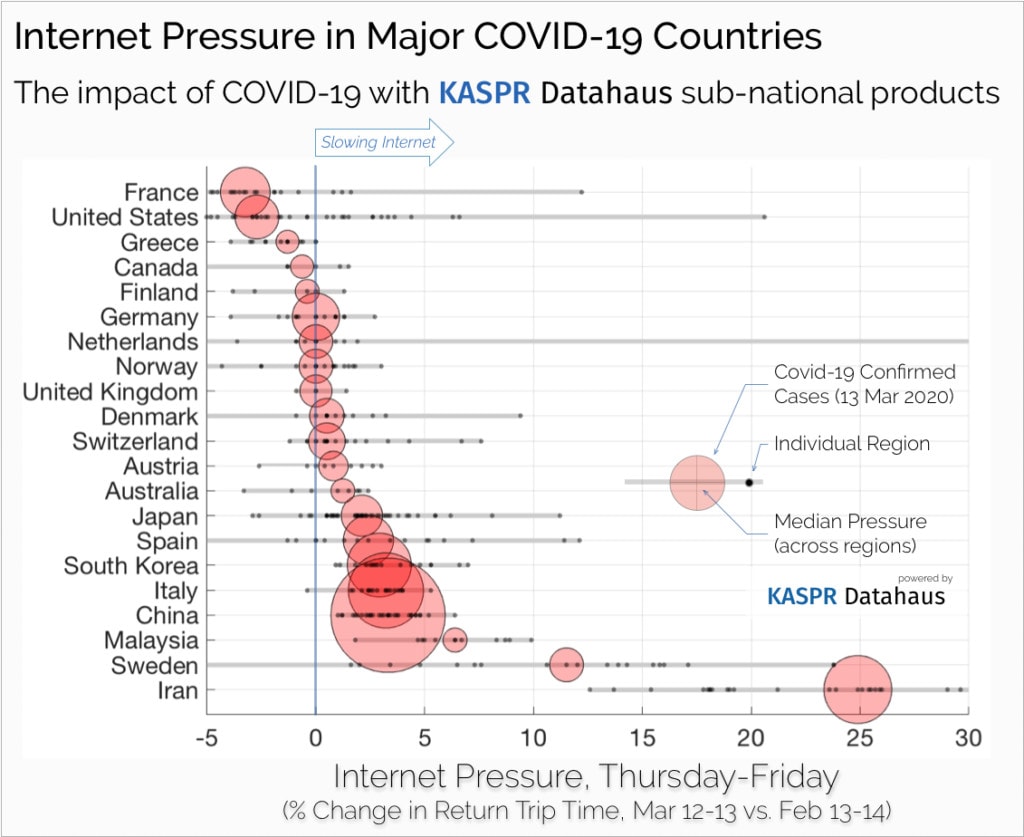 As can be seen, as the COVID-19 lockdowns take hold under heavy caseloads, the internet certainly shows signs of significant pressure, and in some regions, it seems that pressure is leading to crippling online experiences.

Malaysia stands as something of an outlier, in that its internet appears to be struggling, though its reported case-load is still small. There could be a range of reasons for this outcome, but no doubt heightened anxiety among the population, given the proximity to major disease centres, leading to enlarged demand for online content could easily stress a fragile ICT infrastructure.

Sweden seems also an outlier of a different kind. Whilst it has not had the same case-load of some European counter-parts further south, the Scandanavians have certainly acted strongly to limit movement. And, it would seem from our measurements, Swedish Internet capacity is already showing signs of difficulty with median slow-downs across its regions of over 10 per cent.

Notably, Iran, known to be suffering greatly from the COVID-19 outbreak, finds its internet likewise buckling under the pressure, with a median Covid-19 slow-down of 25 per cent, but many regions over 30 per cent and one (Qom) close to 70 per cent, and clearly not holding up:

Likewise, as we have already reported for several provinces, China appears to be experiencing widespread internet bottlenecks: 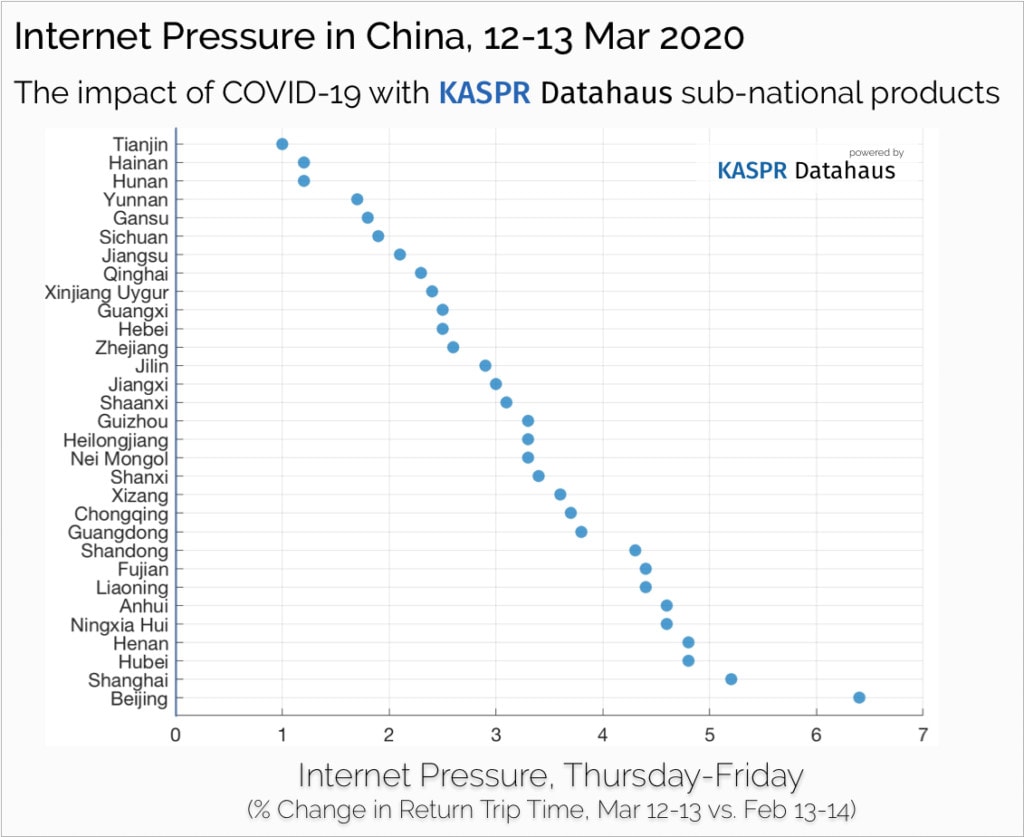 The most impacted regions, revealed in our measurements, reads like a who’s who of the major export regions near Hubei, the epicentre of the virus.

Finally, we look into Italy, who, by all accounts, has experienced a 70 per cent increase in internet traffic with many families apparently resorting to bandwidth-heavy online games to pass the time. 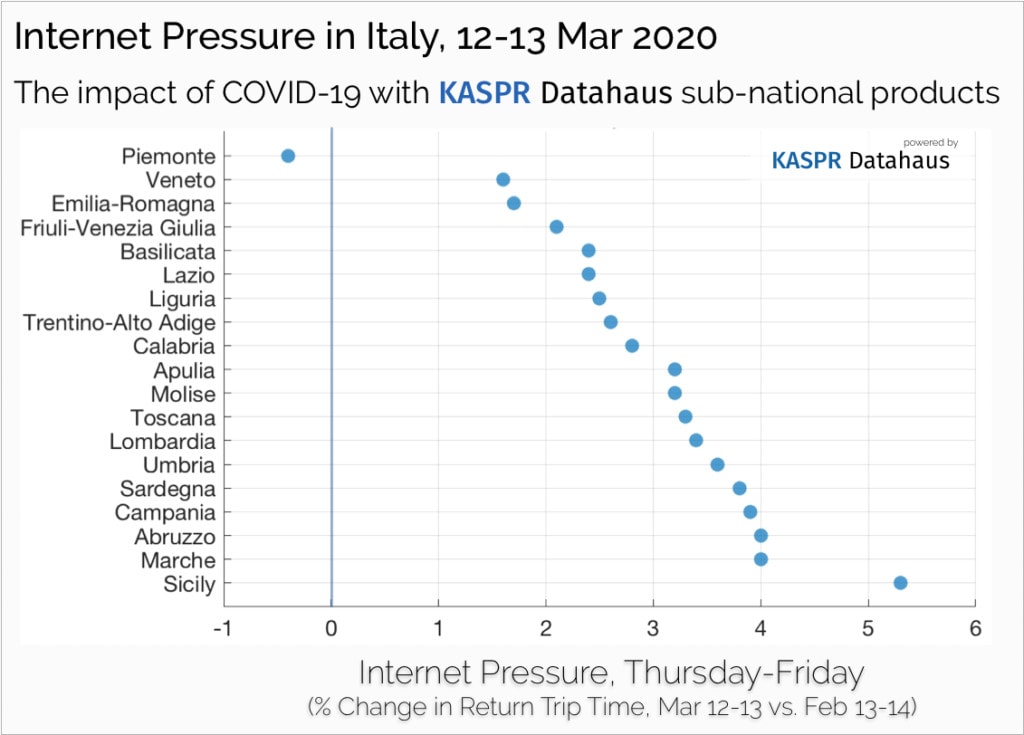 So far, with the exception of Sicily, impacts on the Internet have been milder than in other European counterparts, but it would seem that Italy is already sailing close to the wind.

Taken together, it is clear that as remarkable and transformational as the Internet is, the COVID-19 pandemic is putting unprecedented pressure on national networks as dramatic changes in human behaviour take place in real-time.

KASPR Datahaus is a Melbourne based alternative data company. We have developed a method to collect Internet activity and quality data in real-time.

This piece was originally published at Medium.com by KASPR Datahaus and has been republished with the permission of the authors.