Real or fake? How art experts help push up the prices of the Old Masters 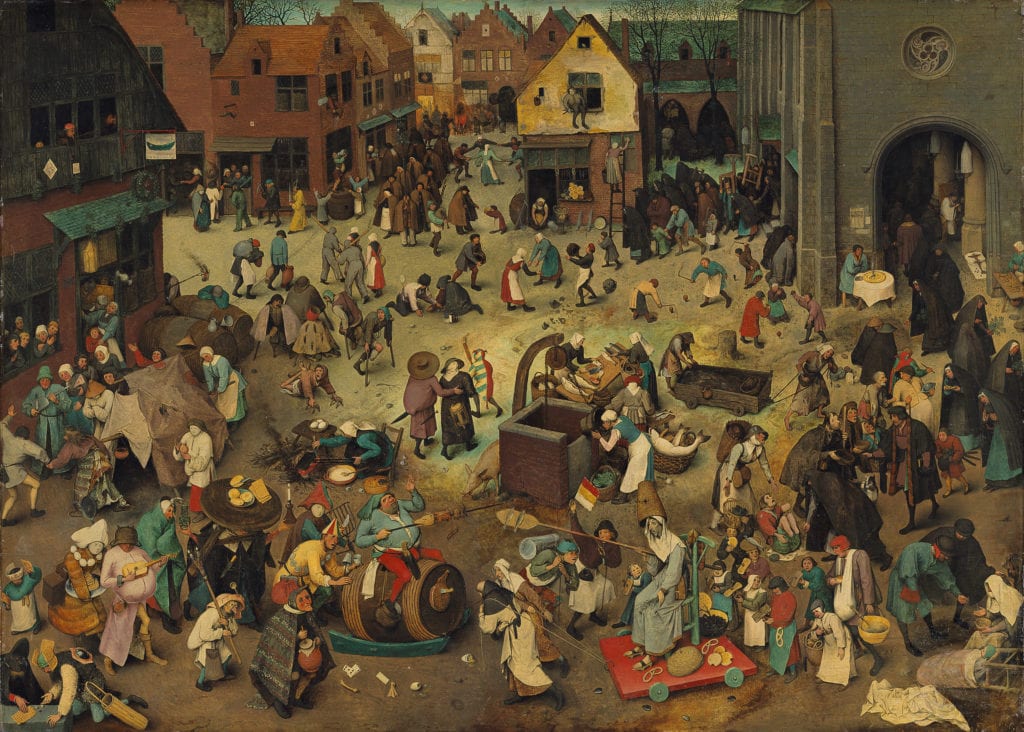 When Italian Renaissance Master Leonardo da Vinci’s painting, ‘Salvator Mundi’ was auctioned at Christie’s New York in November 2017,  it was the object of much ambiguity.

An article at the time shows how sceptics and art history experts questioned both the painting’s authenticity and condition.

One specialist claimed that “it’s a good studio work with a little Leonardo at best, and it’s very damaged”.

Another claimed it was aggressively over-cleaned, ‘especially in the face and hair of Christ’. Nevertheless, it sold for $453 million.

Salvator Mundi is a painting attributed to Italian Renaissance artist Leonardo da Vinci, dated to c. 1499–1510. Long thought to be a copy of a lost original veiled with overpainting, it was rediscovered and restored. Experts are divided on its authenticity.

What role do the experts play in pricing artworks?

In a recent study Dr Denni Tommasi and co-authors Professor Victor Ginsburgh and Anne-Sophie Radermecker both from the Université Libre de Bruxelles, considered how experts’ opinion affects prices of traded goods in the mysterious and sometimes murky world of art.

From the outside, the role of experts in the art markets appears to be especially important but hard to identify.

An art historian, Dr Radermecker explains that they approached Dr Tommasi, an economist, to help with the ‘money side’ of the investigation.

“Art and money do not mix. It is considered tasteless for artists or art historians to put a value on art,” she says.

What was needed was someone who could link to the more granular issue of how to value credence goods – something that is unable to be valued, even after it has been sold.

Wine is another classic example of an experience good whose quality cannot be assessed prior to consumption.

“Wine can also be considered a credence good because its quality when fully mature is difficult to assess upon early consumption unless one is a wine expert or has tasted an extremely large number of wines,” Dr Tommasi explains.

The art world is constantly in a state of flux in its ability to price artwork and the market relies heavily on experts to ascertain the validity of the artwork; that is – is it real and was it painted by the hands of the artist? – as well as the value of the piece.

“We also have access to blue books for used cars, articles by critics for every new car that comes to the market, for movies, books, records, eaters and hotel guides, though bad surprises cannot be excluded.”

Their paper provides empirical evidence about the role played by art experts in affecting prices of traded paintings, something that had not formally been considered.

The case of Brueghel the Younger

The researchers looked at the case of the German independent art historian and expert Klaus Ertz.

As an artist he is widely known for copying the work of his father, the famous Pieter Bruegel the Elder, sometimes reproducing the same paintings with slight variants. 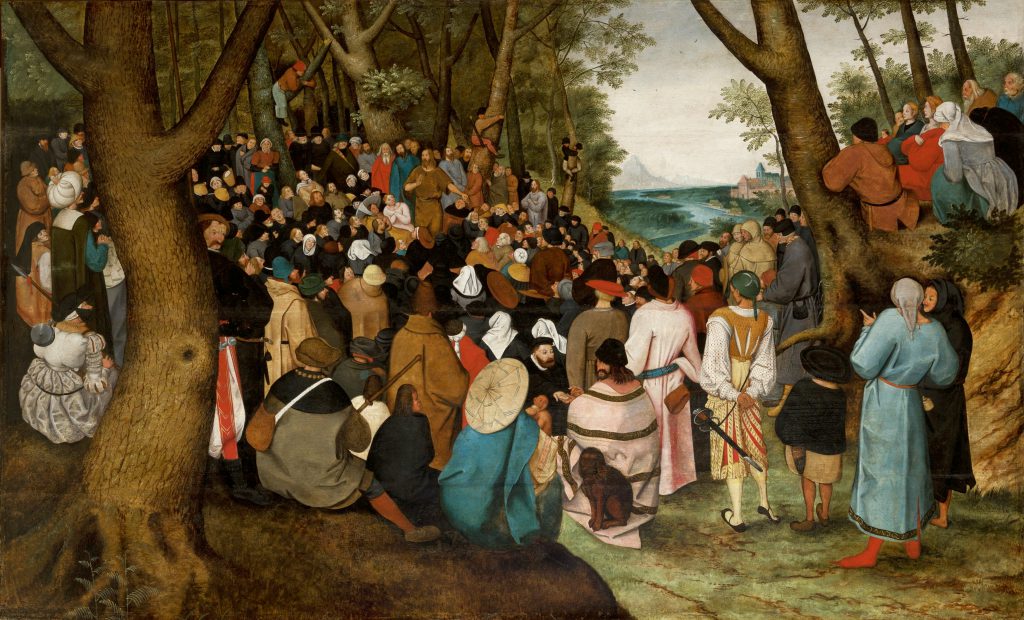 Copy by Pieter Brueghel the Younger of his father’s work The Preaching of St. John the Baptist (1601-1604)

When Klaus Ertz published a catalogue raisonné of all his artwork in 2000 to clarify attributions of his paintings, it had an impact on the price of the paintings.

So the researchers collected the sales of his paintings (autographed) as well as those from his atelier and followers (non-autographed) between 1972–2017.

Interestingly they established that Ertz’s expertise had a significant effect on the prices of autograph works.

“In the end, we learned that buyers were willing to pay roughly 60 per cent more for works sold at auctions considered autograph after Ertz’s intervention,” Dr Tommasi says

“The increase in prices that we estimate is therefore a generalised effect that reveals a higher level of market confidence for autography.” 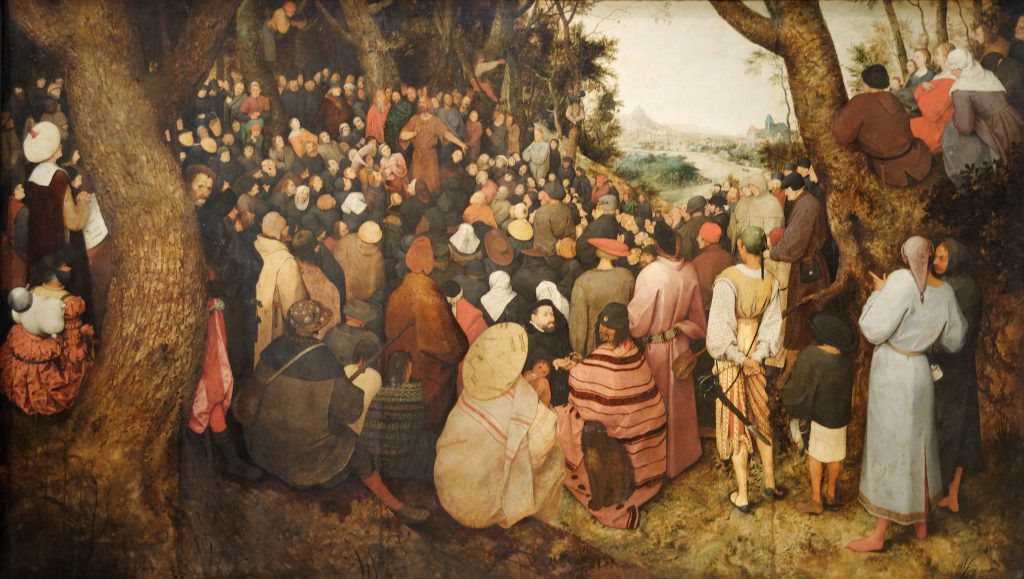 This is the original “The Preaching of St. John the Baptist, by Pieter Bruegel the Elder (1566),

The impact of authentication

Authentication, especially in the case of Old Masters, but also for more contemporaneous painters, is to some extent subjective and the conditions of the work are important.

“Some galleries have websites that suggest works for sale and quote their prices. This may become more frequent but for the time being it is not,” Dr Tommasi says.

“Auctioneers publish pre-sale estimates (low and high) and hammer prices are made public after the sale.”

For both art history and the art market, the attribution process is thus a key concern to correctly identify authorship and bring a guarantee of authenticity.

“While the ‘eye’ of the connoisseur remains useful nowadays, as well as archival evidence, authenticity issues have been partly solved using scientific tools that afford more reliable attributions,” she says.

“But as middlemen, individual experts remain key actors on the art market since they help reducing information asymmetry and increase confidence.”

Dr Tommasi believes the study supports the assumption that reassessing the ‘value’ of works of art is a complex process where price trends and scholarly advances meet marketing and commercial interests.

“This case study also supports the assumption that autography is a determinant issue on the market for Old Master paintings. As informational goods, works of art need to be assessed through a certification process that reduces uncertainty and information asymmetries,” he says.

Real or fake? How art experts help push up the prices of the Old Masters